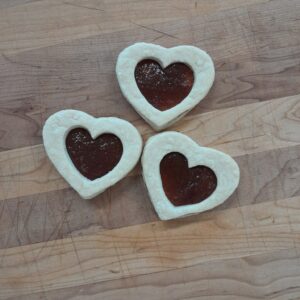 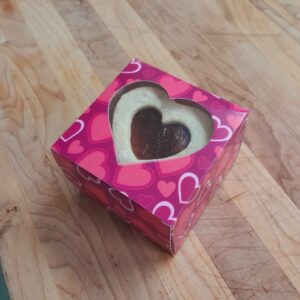 Box of 4 heart-shaped Linzer cookies with housemade strawberry jam in between.

Box of 4 heart-shaped Linzer cookies with housemade strawberry jam in between.

There are no reviews yet.

Be the first to review “Vegan Linzer Cookies” Cancel reply 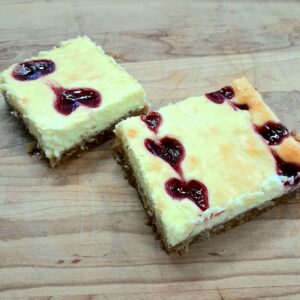 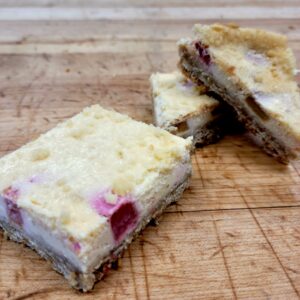 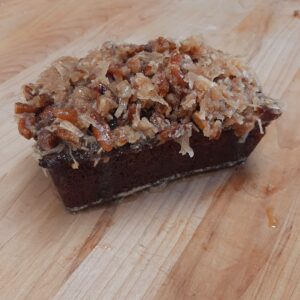 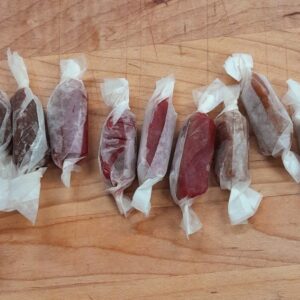 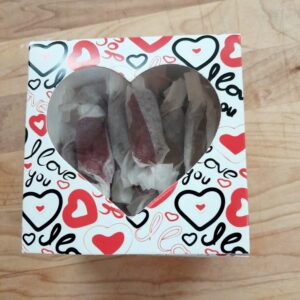 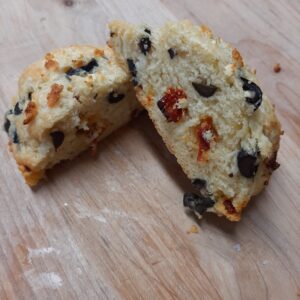 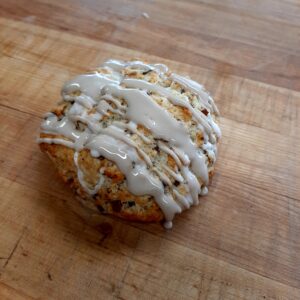 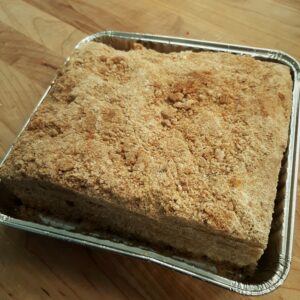 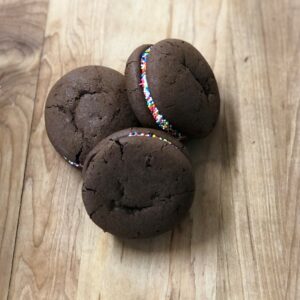 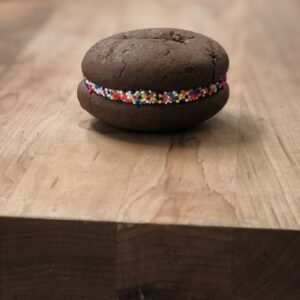 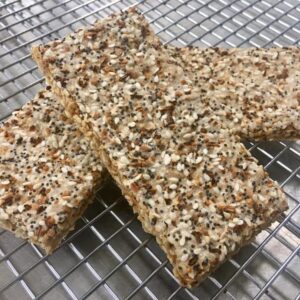 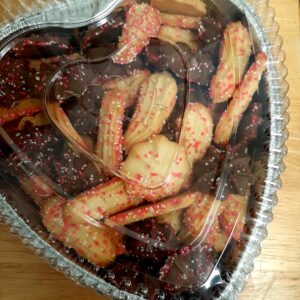 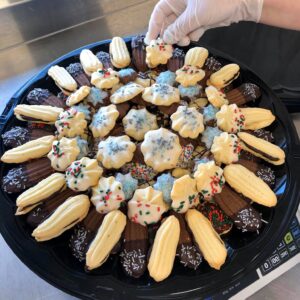 The mission of JustDane has always been to inspire hope and create change at the individual level and community level. JustDane would not be where it is today without the wonderful people who participate in, and give life to, its programs. Tyrees Scott is one of these people. He is the embodiment of hope, change, and perseverance. Born in Chicago and raised in Madison, Wisconsin, Tyrees dealt with struggles while growing up, and as a young man he was incarcerated. Despite tribulations after his release from prison, Tyrees decided it was time to change his life around. He made a promise to himself that he would not end up incarcerated again, and he has lived up to exactly that.

Upon his release, Tyrees had a friend who worked for Just Bakery, so one day he went to visit the bakery to see for himself what it was all about. He was astonished to learn there is a program like Just Bakery that is dedicated to helping folks like him. It made Tyrees think, “I could do this”. In prison he had worked in the kitchen, baking for over 2000 people, so he already knew how to produce food in great quantities. When he decided to apply, he went in and met with Carmella (the Just Bakery Coordinator at that time) and he also happened to meet someone he hadn’t seen in 20 years. Right at that moment, he felt at home. He was accepted into the bakery program.

Tyrees then dealt with the struggles of having been out of school for nearly 10 years. Once he got over the initial challenges, the bakery curriculum became second nature. But towards the end of his program, Tyrees began to lose focus. It was people like his instructor Jackie who pushed him, and never let him slack off because she saw the potential in him. When he successfully passed his final examination, Tyrees went on to become a production employee at Just Bakery.

As Tyrees reflects on the Just Bakery program, he is grateful that he was accepted because it took him on a better path. Carmella became a friend, a mentor, and a support figure. The Just Bakery experience steered Tyrees into Support Recovery Coaching. He was able to support students, teach them, and feel like he was doing good for others. Tyrees wants individuals to take advantage of programs like those offered by JustDane. Eventually in life you realize that you have no more time to get in trouble.

For Tyrees, JustDane embodies accountability. He wants to do good for himself, for the organization, and for the community. Currently, Tyrees owns his own food truck and is a Peer Support Specialist at JustDane. He just finished probation, after 21 years. He is working extremely hard to accomplish all his goals. Today, Tyrees is able to use his lived experience to help people in all aspects of life. For that, he is thankful.

Kim remembers that Friday in March of 2019 perfectly. She had been living out of her truck, but had been taken in by a friend on that day. She was alone, fasting and praying, confronted by the disheartening decision of whether or not to jump bail and run. Kim had never been involved with the legal system before, but was facing nine felony charges. She was lost, feeling misunderstood, and was sure that her case was not being represented properly. Before that day, her future seemed already determined. As she continued to pray, a notification to her phone alerted her to a news article about how the state of Wisconsin has the highest number of people in the nation who jump bail. At that moment, she felt like she was being heard and she felt a tinge of hope.

Not really expecting a response, Kim called the organization that released the article about bail jumping. Kim had gone through this process before. Without fail, whenever she reached out for help, she always was turned down due to the substantiality of her case. This time, while waiting to hear the usual voicemail message, somebody actually answered the phone: JustDane was on the line – a person was speaking to her. She recalls telling that staff member about reading the article and that she herself was looking for any form of help.

“You’re in,” the voice on the phone spoke back to her, “if you can get here, you can join our program.” At that moment, Kim began to cry. She had become so accustomed to being refused help that she couldn’t believe there finally was an opportunity for her. Although she resided in Milwaukee, and JustDane is located in Madison, Kim was determined to make it to JustDane’s door. She needed support. She would live out of her truck again if she had to. She wasn’t about to go back to prison again and lose everything just because she lacked the help she needed to fight her case.

Kim made her way to Madison and began to participate in JustDane’s programs, working closely with then Just Bakery Program Coordinator Carmella Glenn and with her peer support worker, Alex. They were relentless, even throughout the pandemic. They continuously checked in with Kim, staying in safe, physical contact, and visiting with her after she experienced a very close call with suicide. During her time with JustDane, Kim was displaced from her housing and was back living in her truck. Struggling with health problems, she was beginning to feel lost again. This was when Carmella introduced her to Healing House, where Kim could receive recuperative care.

At first, Kim rejected the idea, feeling that she wasn’t worthy enough to accept the offer. Knowing all too well that Kim needed somewhere to heal, Carmella wouldn’t take no for an answer. The opportunity, as Kim recalls, came at the perfect time. Her family had decided to save up and gift Kim with a hotel room for three nights so that she could attempt to begin the healing process. This gesture meant the world to Kim because she was facing charges of child abuse for forcing her children to work to pay bills. This was not the case. On their own, Kim’s children had decided to work so they could save up money and surprise her with admission to an event for farming, which is one of Kim’s passions. Kim always saw herself as a giver, so she felt defeated by the claims against her, but with the unwavering support of her family, she felt hopeful.

Once her stay at the hotel ended, Kim accepted Carmella’s offer and continued with JustDane. She remembers fondly that while working with her peer support group, a seemingly endless number of people were introduced into her world. They praised and supported her every step of the way. When Kim began to think negatively, people at JustDane encouraged her to examine what she could do differently. They celebrated her and all of her accomplishments, no matter the size. They reminded her that there is life after this. Kim truly believes that without having them to support her along the way, and pushing her to complete her program, she would be in prison. On the day of her sentencing, the judge paused to recognize that they rarely see so many people show up to the courtroom. Having JustDane in her corner, with many people and letters in support of her character, changed Kim’s future entirely.